Meet Luke:
Luke started martial arts at 5 years old, and in 2019, received his first degree black belt. After promoting out of the beginner classes, Luke committed to becoming a Black Belt Leader, and joined the Leadership Team. As a Black Belt Leader, Luke constantly uses his leadership abilities both in class and out.

When asked what he feels a black belt is-Luke said, “The black belt represents to me memories of having fun and completing something very challenging. The black belt is an achievement that makes me happy and proud of myself. To get a black belt you have to be self-disciplined, respectful, and courageous.”
Luke knows that earning a black belt doesn’t happen overnight. It is something that takes a lot of time and effort. During the “crunch period” part of his training, Luke set a lot of other activities aside to peruse this goal. He said, “I had to temporarily give up baseball, swimming, and a lot of downtime to focus on all the aspects of training.” In preparing for his black belt, Luke went to countless workshops in order to make sure his skills were sharp for his test. You could also find him after those workshops doing extra independent practice, showing superb self-discipline. Luke earned his black belt when he was in the third grade, but age is just a number when it comes to his self-discipline. He even took his self discipline so far, that he personally called to schedule a private lesson for himself prior to his black belt test.

In terms of respect, Luke is top-notch. He is always willing to help the lower belts practice their moves, and is the first one to volunteer to help the instructors. At home, his parents say that he shows extraordinary empathy and care towards his little sister. They explain, “He goes out of his way to make her happy, spending hours playing with her…” Luke also loves being helpful to his parents. They say, “He takes great satisfaction out of doing some chores around the house.” However, as Luke reflected on his training, respect is something he recalls was not always his strongest characteristic. He says, “I feel that being respectful is not something I was great at when I first started martial arts, but I have improved over the last five years.”
Luke’s parents would agree that Luke has developed many black belt characteristics since first starting martial arts. They worried when he first started that he was “goofing around” too much; however, now that they believe that his ability to focus is one of his strongest character traits!

Luke is not the biggest guy in the class but he sure is one of the most skilled. When he first started, he was much smaller compared to the other kids in class; however, he did not let adversity stand in his way. He learned how to use his size to his advantage, and now he can do things that people who are bigger than him cannot do. Being able to keep calm when faced with many challenges is something that is very difficult to do-especially when you are often times the smallest kid in the class. This is something that Luke recalls was a challenge for him. He says, “5 years ago, I wasn’t emotionally strong because I got frustrated easily. When I was frustrated, I often cried, and I was not focused on my session. Today, I am very focused, and I do not cry when I have trouble in training.” 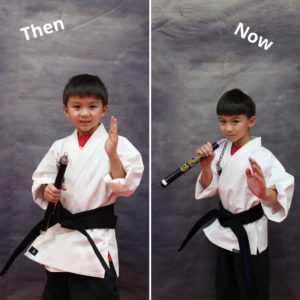