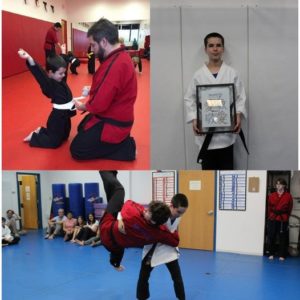 Luke started martial arts in 2015 when he was 6 years old. Luke is also a member of our Black Belt Club, and you can see him attending workshops on the weekend.

On June 12th, 2022, Luke received the rank of 1st Kyu! Luke was a new brown belt when we had to pivot to Zoom during the pandemic, but this did not stop him. He adapted, adjusted, and gave it his all to earn his black belt.

When he first started, his parents wanted their kindergartener to grow his confidence. His mom says, “Luke was very quiet in social situations and lacked-self confidence.” They liked that martial arts was a sport where students move at their learn own pace to earn their own goals. As he progressed through the ranks, his mom says, “He thrived in setting where people believed in him and pushed him to meet his goals. Like treasured each postcard that arrived in the mail. boosting his confidence in himself.”

You can see this change in confidence by the way Luke presents himself in class. He usually has the most powerful line-up at the start of the class.

2 days after his black belt ceremony, Luke was asked how he felt, and he replied “proud of myself.” This once shy kindergartner grew up to achieve something that very few people have achieved, plus gained a sense of confidence in himself along the way.