Aiden started martial arts at 6 years old, and earned his Black Belt in 2021.

Aiden believes a black belt “needs determination, bravery, and persistence.” That persistence and determination was apparent during Aiden’s training, and he even recalls a time where he “wanted to stop karate because it was getting too hard, but I had determination and stayed with it.”

Aiden’s determination can be seen even post black belt test. Aiden usually sticks around after class to work on his skills- whether that’s a form, or working up to breaking 7 boards stacked on top of each other. Aiden’s love for martial arts doesn’t just stop when he leaves the dojo, his mom shares that he is also always practicing at home!

When Aiden’s parents originally signed him up for classes, they wanted him to build his confidence. A few years back, Aiden’s mom recalled on her original reason for signing up Aiden for martial arts, and building his confidence was one of her top priorities. She shared that martial arts has helped with his confidence, and said “definitely I see the confidence has increased. More-so when he is at school teachers have told be he may [have known] the answer, but he would never reveal it, now he raises his hand to give it a try…and I feel like with karate he just felt like it was okay to just try and do something new.” 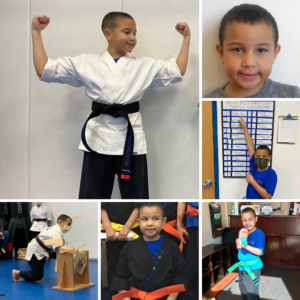