James officially started his martial arts journey in the fourth grade and joined our Leadership Team about a year later. In June of 2022, James earned his first-degree black belt.

What does James believe a black belt is? He believes, “A black belt is, really a symbol of dedication. It isn’t something that you can really be inherently excluded from, it just requires effort.”

James’ dedication to martial arts is something that has grown more and more, especially when he earned his brown belt. He says, “I nearly quit martial arts around green belt simply because I disliked how much free time it took up. Now, even though a brown belt is objectively much harder, the thought of quitting was never given any real thought: it was a matter of when I got my black belt, not if.”

Understanding the importance of a long-term goal, and following through with it is no easy task-it requires a lot of hard work. The fear of hard work did not stop James from achieving his goal of becoming a black belt. Even if that meant staying late after class or staying up late to do his brown belt conditioning. His parents said, “most nights, we could hear him thumping, thudding, huffing and puffing in his upstairs bedroom while he drilled his conditioning exercises.”

James’ leadership abilities can be seen on and off the mat. On the mat, James is a “fire-starter” in the class and often sets the example for the rest of the students. He will not hesitate to volunteer to run warm-ups for the class or lead the team activity. Outside of martial arts, James’ teachers notice his leadership abilities as well. His science teacher says, “Not only have I learned that James is a focused student over this year, I have also observed that he has exceptional leadership skills…James is someone that I can always count on in class to be prepared and to participate in activities and discussions.” 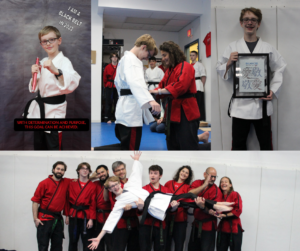