Edward started martial arts at his preschool, and then officially started training at the dojo in 2015, when he was 5 years old. Edward earned his black belt in December 2020, and was part of the extraordinary group of kids who had to face a challenge no black belt before them had to face- earn a black belt during a global pandemic. Despite the uncertain times, Edward fought through the adversity, and worked his absolute hardest, whether that was coming to Zoom classes, or doing a black belt test outside in 35 degree weather, and earned his Black Belt.

At 5 and a half, Edward committed to being a Black Belt Leader, and joined our Leadership Team. The Leadership Team concepts he has learned have influenced his perception of what it means to be a black belt. When asked about what a black belt means to him, he said “I think a black belt is someone who is strong and responsible. I also think that a black belt should be someone who is a good leader. I also feel that a black belt should be a kind and helpful person.” Furthermore, his goals for the future include wanting to get “the chance to help more during class.” Not every (then) 10 year old has the goal and ambition of helping others, but clearly Edward is not a “normal” young man.

Edward makes sure that his leadership skills are present off the mat as well as on the mat. His teachers have said “Edward helps his classmates with their work in class and he is able to do it with kindness.”  He also notes that this is something that he has developed over the years, stating “I have learned to help people with encouragement.” Again, this is an extraordinary feat for an elementary school student to recognize in himself, as well as have teachers notice and acknowledge it.

Lastly, here are some wise words from Edward about his journey to black belt, “I have matured emotionally and learned that some things are very difficult, but if you preserve you will be able to do amazing things.” 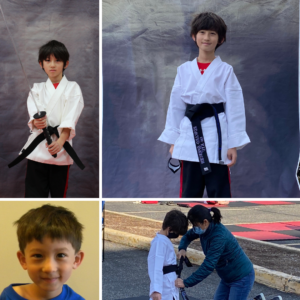