Piper started her martial arts journey just shy of 8 years old, and earned her Black Belt in 2019. She set herself on the path to become a black belt leader, and joined Leadership Team where she learned to be a leader both on and off the mat.

Piper is the oldest of three siblings, and even started her training with her younger sister. At home, her parents explain, “she sets a great example for her younger brother and sister.” Sadly, her sister ended her training, but instead of letting this discourage her, Piper says she learned a valuable lesson. Piper said that after her sister stopped, “this is when I began to understand independence.” She no longer had an “automatic” training partner- she had to figure out how to achieve her black belt without having her sister right by her side. Over-time, she gained new training partners in class, and gained numerous friendships.

According to Piper’s parents, “there were times that Piper’s commitment to karate waned somewhat as other activities seemed more important.” However, Piper made a commitment, and stuck to it. In leading up to her black belt test, a time period that was nicknamed “dress rehearsal,” Piper came to class almost every day, and then stayed around after her class to do extra independent practice. Her parents are proud of Piper’s ability to accomplish a long term goal, stating, “Piper now has the experience of working towards a long term goal…karate has proven to be an invaluable medium to teach our daughter about persevering in life.”

Last, her parents said, “we see how Piper’s growth in karate serves as a source of empowerment for her, in more ways than one.” 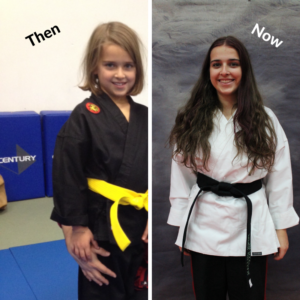